When we talk about new moons, we usually emphasize the “lighter” side: starting fresh, setting positive intentions, manifesting something new and positive,  But at the new moon in Scorpio, we need to talk about the darkness.

Yes, death and rebirth go hand-in-hand at any new moon—but while some signs are uncomfortable facing this reality, the November 2018 new moon in Scorpio looks it straight in the eye.

WHAT DOES THE NEW MOON IN SCORPIO MEAN?

With intense focus and hidden observance,  Scorpio sees it all. But with this fixed water sign, what we see is often just the tip of the iceberg. There’s a whole lot more going on beneath the surface: subtle energies, subconscious motives, and suppressed emotions.

Scorpio plays its cards with power, determination,  passions, passions, and charisma and Quietly and completely bringing forth “death and rebirth” to create our intentions.  at the November 2018 new moon 15 degrees of  Scorpio, we’re likely to do the same. We know what we desire, and we’re determined to get it. But we’re wary of discussing our intentions with anyone else—that might take away their power.

And power is a big deal to Scorpio. What else would you expect from a sign ruled by both Mars and Pluto? Mars, the ancient ruler, represents the personal or “lower” will. Modern ruler Pluto represents the “higher” will—whether that’s destiny, evolution, or our belief in a Higher Power.

The secret to mastering Scorpio’s energy—and rising above negative expressions like manipulation and possessiveness—is putting the lower will in the service of the higher.

Moon in Scorpio creates the need to delve into your feelings as deep as possible and this brings great vulnerability. You need a deep emotional relationship, even if it is not easy and you are forced to change many things  It should prove to be a deep and introspective day for you

The New Moon in November is at 15 DEGREES OF SCORPIO.    The 15 degrees of Scorpio is the significant factor here.    This may of be of some interest. The 4 fixed planets that made up the “Four Horsemen of the Apocalypse ” are the FIXED SIGNS OF LEO – REGULUS, FIXED SIGN OF TAURUS – ALDEBARAN – FIXED SIGN OF SCORPIO – ANTARES, AND FIXED SIGN OF AQUARIUS – FOMALHAUT. 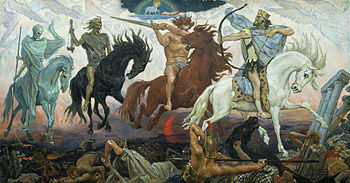 Four Horsemen of the Apocalypse, an 1887 painting by Viktor Vasnetsov. Depicted from left to right are Death, Famine, War, and Conquest. (EARTH FIRE WATER AIR)

15degrees of Scorpio represents ANTARES, which is The traditional ruler of Scorpio There is a recurrent theme of fear of nature from this. Antares has been feared due to destructiveness, and its headstrong and destructive nature, and has carried a fearsome reputation. KEYWORDS FOR ANTARES: Intense, Dramatic, Militant, Passionate (sound like Mars?)

The new moon will be making grand cross transits to the other planets that relate to the Fixed Horsemen.